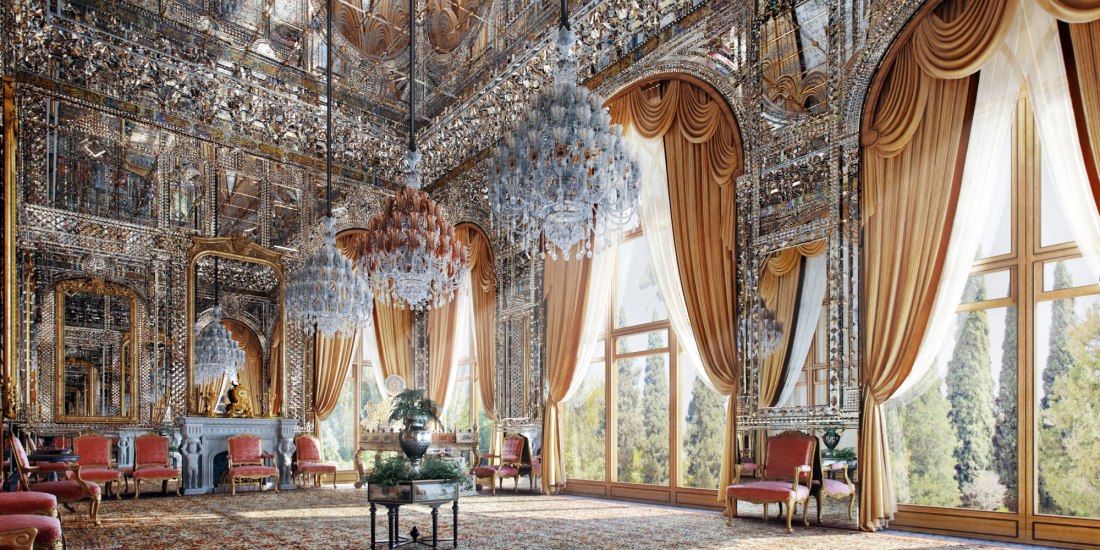 Header image of the Golestan Palace Hall of Mirrors, courtesy of Yazdi Rad.

Photo of the ceiling of the Hafez Tomb in Shiraz, Iran. Hafez is one of the greatest Persian poets. Photo courtesy of Flicker user lukadium.

When people first meet me, one of their first questions is always “where are you from?” Sometimes I receive a blank face and confused eyebrow-raise, preceding the extremely blunt, “what are you?” I’ll tell them that I’m Persian, something that I’m extremely proud of and will gladly share with others.

However, what most people don’t know is that Persian – or Farsi – is my first language. At the age when parents speak to their child in English to develop sounds and associations, my parents spoke to me in Persian. Little by little these sounds were embedded into my brain, and Persian became my instinctive language. In fact, because English was such a foreign concept to me, upon enrolling in Pre-School, my parents had to make Persian-to-English flash cards for my teachers so that they could communicate with me. Though I come from a fully Persian background, having been raised in Texas, English became extremely prevalent in my life.

Growing up, my parents enrolled me in a Persian Sunday-school where I would learn dini (religion) and how to read and write in Persian. Much like any elementary school, there were different grades assigned for each section of development within the Persian rhetoric: first years, second years, third years… etc. I completed up till the fifth year, learning to read and write in Persian, as well as completing tedious hours of homework to strengthen my skills.

Now, Persian, much like any other language, has a variety of letters representing certain sounds, tenses, and forms specific to the context of a word or sentence. An extremely elegant and lavish language, the Persian language claims a whole of thirty-two standard letters, six more than the English language. Within these letters are different forms of the letters, which are used at different times. For instance, there are several forms of the letter which resembles “I”: one where you use at the end of a sentence, in the middle of a sentence, at the beginning of a sentence, and even in conjunction between two words, etc. Granted, with these extra letters come extra sounds, and additionally, extra words, phrases, and expressions.

One summer evening while I was driving up to Dallas with my mom, I thought of the idea for this blog post: things Persian people say that don’t make sense in translation. For the next hour we brainstormed common phrases that we use in our day-to-day dialogue, and within them, found an extremely large number to be ridiculous and comical in translation. Though they make perfect sense when used in Persian, the context is lost in translation, and the gist of the phrase loses all and any meaning.

Additionally, Persian is a very emotional and dramatic language – in the Romeo and Juliet “I die for you, you die for me” convention. And with the drama, comes the lighter end of the spectrum, making Persian a language that is central to the idea of life and living. With the purpose of embedding a genuine quality, the Persian language often intertwines the elements and human anatomy in every-day phrases and expressions. I know, that doesn’t make any sense, but keep reading and you’ll pick up what I’m putting down. Let me introduce you to thirteen commonly used Persian phrases which are unseemly in translation.

You can use this phrase literally anywhere, and in Persian, it’s actually used when you’re trying to express how much someone means to you or how much you appreciate the person. It’s not dark or suicidal in Persian, but when translated to English, we face a dramatic disclosure. This one is for all of our Bruno Mars “Grenade” lovers out there in the world. How romantic is it for someone that you love, and loves you in return, to offer themselves as a sacrifice for you? That’s totally sweet! You catch that grenade for me, I really appreciate it. So use this phrase when you’re just extremely grateful for someone, they might just say it back.

This phrase is the Persian equivalent to along the lines of “sh*t!” An unfriendly phrase, you would use this as a cry of grief when something goes wrong, you’re angry, or just frustrated. The literal translation is snake poison, “zahr” meaning poison and “mar” meaning snake.

One would use this phrase when you’ve had an “uh-oh” scenario unfold, and you’ve realized that you’ve done something terribly wrong or are dealing with something ludicrous. I mentioned that Persian is an extremely dramatic language, and this phrase doesn’t take it lightly. In fact, when you use this phrase, you’re basically admitting that what you’ve done is extremely horrible; to the extent that you deserve to bury your head in filth, rather throw dirt on it. This phrase can also be used offensively, changing it to “khak bar saret,” meaning “dirt on YOUR head.”

Used in a sentence: “Pedar sag, mageh nagoftam in karo nakoni?!” = “Dog father, didn’t I say not to do this?!”

Dog father… what? This is simply an insult that is used when expressing anger, irritation, or disapproval. There’s not much explanation for this phrase, but know that when you hear it, you’re in trouble! This phrase can also be used as a term of endearment when joking around, don’t ask me why.

When you hear something absurd, ridiculous, unimaginable, shocking, unexplainable, this is the phrase to express how much you’re in awe. Like “ghorboonet beram,” this phrase is just a bit dramatic, but can be thought of as the Persian equivalent of “kill me.”

This is a personal favourite of mine and I’m guilty of using it many times throughout the week, or… day. This doesn’t mean to pick life, rather hurry. You can use this in many different ways. It can mean something like “c’mon already” or “hurry up!” The Persian language is very central to life, so in this phrase, you’re basically questioning whether or not the subject is alive because they’re so slow. Does that make sense? Picture this: you’re in traffic and the car in front of you is driving so slowly, to the point that the green light turns yellow and finally red. In this instance, you’d exclaim “joon bekan!” to express your irritation and impatience.

7) Moosh bokhoradet = may a mouse eat you.

Used in a sentence: Pinching a baby’s cheek, “moosh bokhoradet!”

When something or someone is extremely cute, this is the phrase to use. In fact, they’re so freakin’ cute, a mouse should eat them. Don’t ask me how this makes sense, or why this is even a phrase, but it’s meant to be used when referring to something that’s super cute. Mice are cute, I guess.

This phrase is used when trying to comfort someone and express that you are concerned about them. It’s just like when you say “I got you” to a friend when they’re freaking out about getting a job or what’s on a test. If you want to express to a Persian that you have a their best interest in mind, just tell them you have their air, they’ll thank you for it. “Havatoh daram” is the equivalent of looking out for someone.

Used in a sentence: “Jeegareto bokhoram!”

This is an endearing statement used when you’re trying to express to someone that you love them. I would never say this to a stranger, rather a family member or close friend. For example, my uncle says this to me all the time, but he has no intention of eating my liver. Here’s a prime example of how the Persian language uses human anatomy as a means of endearment.

More endearment! For Persians, jeegar translates to liver, though the meaning can also be intense love. If someone tells you that you’re their liver, you’re extremely important to them. Unlike the English language, the Persian language has a million ways to say the same thing. For instance, in English, to express your undying love, you’d simply say, “I love you.” In Persian, you can say it several ways: “asheghetam,” “jeegareh mani,” or “nafaseh mani.”

Used in a sentence: “Ziyadi pool dadam, saram kola gozoshtan” = I paid too much, they put a hat on my head.

Use this one when you’re finding out that someone’s tricked you. The phrase can also be manipulated to mean you’ve tricked someone, putting the hat on someone else. Persians speak in metaphors, so don’t let them put a hat on your head.

This phrase means the literal opposite of what “salty” means in English. In fact, in Persian, if you’re told that you have “namak” (salt), it just means you’re extremely cute, clever, witty, pleasant, “ba mazeh” (with taste). The way the Persians view it, salt adds flavor to things, so you would love to be salty. You can turn this one around and say “be namak,” meaning without salt. This is where it gets confusing. If you’re without salt, you’re the English version of “salty.” This means you’re cranky, bitter, and unpleasant. You want to be told you’re “ba namak,” not “be namak.”

The final phrase that’s lost in translation is one that’s somewhat common in English vernacular. When you fall down badly, you would exclaim that you’ve eaten the ground as you’ve literally fallen down. “Khordam” can mean “eating” or “hitting,” in this phrase, it’s almost as if they can be used interchangeably because when translated, one is just an exaggerated version of the reality of falling on the floor. Though you’re not literally eating the ground, somehow, somewhere, someone thought it would make sense to compare falling dramatically to the act of eating.

All of these phrases, though seemingly nonsense, mean something very distinct and are prominent in Persian day-to-day conversations. I tried my best to translate these phrases word for word, though for some instances, the words are lost in translation. The Persian language is a very rich and beautiful language, originating in its earliest form in 1500 BC. I hope you’ve enjoyed this read as much as I enjoyed writing it! I’m looking to write more blog posts to share with you all about my Persian heritage and history.

Also read 11 Things People Growing Up With Persian Parents Can Relate To.

I’m a proud alumni of the University of Texas at Austin. Green tea activist. Finance professional. Lover of white nail polish, creative writing, and Spanish architecture. I believe it's important to laugh at yourself and not take everything so seriously. Stargazer? I'm not good at bios. You should probably read my blog.